Mr Justice (late) Raghavendra Jahagirdar ( 1927-2011) was president of Indian Radical Humanist association.I worked with him as general secretary. Now all his writings are made available  in website to download: at 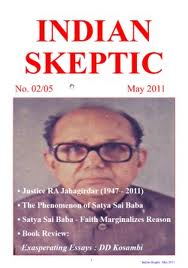 All books of M N Roy are now available in website. Please circulate this valueble information and utilise.
Innaiah Narisetti

Here are 8 more books of M.N. Roy on the following RH Web portal now for you to download and read directly on your Computers.

'Reason, Romanticism and Revolution' Volume I

The Russian Revolution and the Tragedy of Communism',

'Historical Role of Islam' and

'From the Communist Manifesto to Radical Humanism'.

You will be able to read the entire collection of Roy's books on the RH Portal soon.

It is gradually being uploaded there.

Happy reading of the above mentioned books till then!!!

Posted by innaiah at 1:54 AM No comments:

Rare book traced: M N Roy The man who looked ahead by A K Hindi


Review article
M.N.Roy , the man who looked ahead by A.K.Hindi may not be very attractive book today.But it created history in 1938 when it was published  by the Modern Publishing house, Ahmedabad.The main reason was that Roy was mystery to many, especially when he newly entered congress politics with gandhi cap and khadi dress. The Faizpur congress session was about to commence and just on the eve of the session A.K.Hindi came out with this sensational book. Hindi himself was psuedonym.His real name was Tayab Shaik. Those days were full of British secret services sorrounding the followers of M N Roy. Tayab was close associate of M N Roy in Germany in the late 1929 who was sent to India to prepare ground for Roy`s entry. Tayab did that job ably. Only few people like J B H Wadia, V.B Karnik knew him.
Tayab was an engineer and very intellegent person who helped Roy. J P Haithcox mentioned his role in his oxford publication: Nationalism and communism in India. Tayab was orator and good organiser. He helped Roy to build up radical wing within congress and later Radical democratic party.
Gradually the importance was given to V   B Karnik which made Tayab soar.He left the movement and disappeared to UK.He was not traced.
This book of A K Hindi covers the life of Roy until he returns to India in 1930.Earlier life was narrated by Hindi in a racy style. I understand that much of it came from the first hand information from Roy to Tayab. Much of it appeared later in the memoirs of Roy. That is why no mention was made about the first wife of Roy and her role in Mexico, Europe, as well as in Russia. That was great defect in the memoirs, of course.
A K Hindi wanted to publish second volume on Roy but he never wrote it.
This is 1/8 crown size book of 242 pages.It is priced at one rupee and eight annas.
Dasarathlal Thakar was the publisher.Champaklal Bhati was co publisher. This small book was published in three printing presses.This may be due to urgency and also may be they wish maintain secrecy about it. The book has 22 small chapters.Second volume is supposed to consist of 17 chapters.
M N Roy`s picture with gandhi cap and Khadi dress was published.
A K Hindi mentioned that Subhas chandra bose came from the village where Roy was born.It was wrong statement. Bose was born according to facts, in cuttack, Orissa.
Those days were very antoganistic to Royists, and none of nationalist dailies, journals publish their news nor articles.
Yet they attracted the attention of world and left forces in India.
What happened to A K Hindi vis a via Tayab Shaik is yet to be traced. Persons like Sibnarayan ray made vain attempt in UK
Anyhow the book has great historical value.
This book of A  K Hindi is not in libraries including Library of Congress.
Innaiah Narisetti

Posted by innaiah at 3:20 PM No comments: