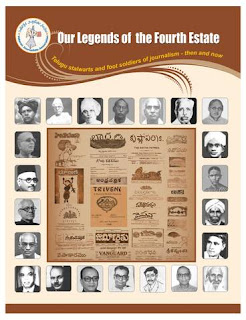 Veteran journalist`s association of Andhra Pradesh brought out OUR LEGENDS OF THE FOURTH ESTATE during 2011. It is good reference material about past and present journalists both working and retired too.
The volume covered 369 journalists with brief biodata and with pictures.
5 journalists in USA are selected who are Telugu origin persons- under the banner-our folks in foreign media. They are: J.V.Lakshmanarao from Chicago Tribune; Raju Narisetti, managing editor of Washington post; Pemmaraju Uma from TV media; Ravi R. Ponnangi and S. Venkatnarayana.

The journalists are categorised  as The legends, Dear departed, Leading Lights and Vintage vistas.
The living and present working journalists are put under the caption : Captains and foot soldiers with their picturs and names only.
Rest of the journalists are given with brief available biodata which is definitely useful for reference and further research.
Several titles of journals were printed which brings nostalgic memories. Some activities of journalists were depicted in pictures along with prominent politicians and statesman.
1/4 demy size book is priced at Rupees: 300/
$ price is not mentioned.
The volume can be obtained at: Plot 24, Journalists colony, road 3, Banjara Hills Hyderabad 500034,India

The Editorial board for this volume consists : G.S.Varadachari, Dasu Kesavarao,(for English),
T.Udayavarulu,, and coordinated by Mr Konda Lakshmanarao.
The Editors hoped to bringout next edition with all corrections and more definitive information and additional journalists too.
This is welcome effort.
By Innaiah Narisetti
Posted by innaiah at 3:44 AM No comments: