CHILDREN SHOULD BE RESCUED FROM RELIGIONS 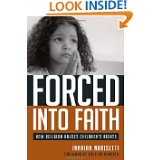 The Radical Humanist movement in India under the guidance of phislopher-revolutionary M.N.Roy played vital role in bringing renaissance and rational thinking as well as secular outlook in public life.As part of it The andhra Pradesh state contributed its mite through innumerable study camps, secular marriages, conferences, literature.Humble attempt was made to trace the history of the movement which was published in
Radical Humanist monthly journal under the editorship of Ms Rekha Sarawat.The link to the site can be viewed at:
http://www.theradicalhumanist.com/index.php?option=com_radical&controller=article&Itemid=56&cid=324&task=single