J B H Wadia
Humanist and Producer of Stunt Pictures
The wall posters of Nadia were a great attraction when I was an Intermediate student in in 1954.
Although J B H.Wadia released his movie ‘Hunterwali’ in 1935 and ‘Miss Frontier Mail’ in 1936, movie theatres in Andhra screened them only 20 years later.
Wall posters showing Nadia wearing black sunglasses and tight pants and holding a hunter attracted youngsters. In the movie, heroine Nadia races beside a train on a horse, suddenly jumps off the horse and hops into the train, beats the villain, hops back onto the horse and rides away. The movie watchers jump in their seats as they watch the thrilling scene.
The movie was a great success at the box-office.
Hindi stunt movies came 30 years earlier. Vithalacharya’s and Nadia’s movies made students and youth go into a frenzy those days.
By 1943, Nadia had acted as a romantic tragedy heroine in the movie ‘Mauje’. Although she was a foreigner, she was the first Indian heroine to act in stunt movie. Later she settled in and married.
J B H Wadia’s son ran his ‘Movie Tones’ studios in . Wadia spotted talent in Nadia when she was 20 years of age and inducted her into the movie world. Gradually, she became closer to Wadia’s family and wanted to marry his brother. However, his orthodox Parsi mother did not approve of it. Nadia waited until after her death in 1960 and married  brother of J B H Wadia.
I met Nadia around 1970 through Wadia. She had stopped working in movies by then.
Around 1970, I got acquainted with J B Homi Wadia as he too happened to be a follower of M N Roy. Wadia, who played a pivotal role in the Radical Humanist Movement as a close companion of M N Roy, called himself a ‘Royist’.
He wrote a small book with a nice title - ‘The Man’ -- about his attachment to M N Roy. Hidaythulla, Vice -President of India, released the book.
He collected rare photos of M N Roy. Casa Da Vinci was the name of Wadia’s residence. The couple stayed there and enjoyed the hospitality of Wadia. Wadia was very courteous to his guests.
I invited Wadia to and arranged meetings where he narrated his experiences.
We once organized a meeting at Hyderabad Central University Office, located in Abids then. Abburi Ramakrishna Rao, A L Narasimha Rao, Avula Sambasiva Rao, Jasti .Jawaharlal, N K Acharya, A .S Vadwalkar, Alapati.Ravindranath, and Alam Khundmiri participated in that get-together with enthusiasm. Wadia delivered a speech. We queried about his movies and especially about Nadia. He answered patiently. That was a memorable experience.
Wadia hinted on that occasion that he would produce a documentary on M N Roy. It, however, materialized many years later only.
Never had I imagined during my Inter days when I watched Nadia’s movies that I would meet her and Wadia. As I became close to Wadia, I corresponded with him and met him whenever I was in . As a Humanist, he never injected religious superstitions into his movies.
Wadia was close to V B Karnik, V M Tarkunde, G D Parekh, Indumathi, G R Dalvi, and A B Shaw.
Nadia’s original name was Mary Anne Evan. Her mother was Greek, and father Welsh.
Mary Anne Evans came to at the age of five. Along with her father, she trained in horse riding and ballet, and worked in Jarcho circus.
About 1930, Wadia saw her, invited her, and molded her into a heroine. She bade good-bye to the movie world in 1970 after the movie ‘Ek Nanni Munni Ladaki’. Soft-spoken Nadia settled well in a Parsi family. She died in 1996.
J B H Wadia was an extraordinary filmmaker, director, and Humanist. He worked in the Radical Democratic Party founded by M. N. Roy. He kept politics separate from filmmaking.
Wadia passed away in1986.
Posted by innaiah at 2:53 AM No comments:

I met Samaren roy in Kolkata during 2005 along with my friend Mr Isanaka
Muralidhar. Mr Samaren was pretty aged by that time. He welcomed me heartily to his
residence and entertained with snacks.

Samaren was in correspondence with me since long time.
He worked in American consul office in Kolkata and retired during early 1950s.
He was always interested in M N Roy and did lot of research about Roy‘s early
phase. Then he published couple of books on Roy as communist and then Roy as
Samaren claimed that M N Roy was the first communist in India. It was Roy who
founded communist party of India in exile from Tashkent in early 1920s.
Samaren also called Roy as restless brahmin~!

When I published research biography of Evelyn Trent, the first wife of M N
Roy, then Samaren was fascinated towards my work and requested for copy. I sent
one to him. I was critical of Roy‘s attitude towards his first wife. Roy divorced him
mercilessly from Europe in 1925. Till then Evelyn played major role in his life.
Regarding birth dates of M N Roy there was difference of opinion between Sib 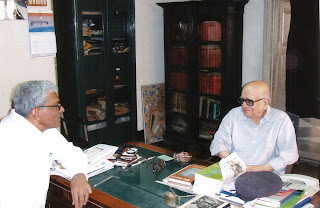 Chat with Samaren in his house in Kolkata
Samaren travelled frequently to USA and established cultural contacts with Bengali associations in Dallas, Teas state.
He told me several interesting facts about M N Roy.
I was fortunte that I could meet him . Later during 2007 he expired. I am glad that
I could preserve the picture with him.
Posted by innaiah at 12:44 PM No comments: