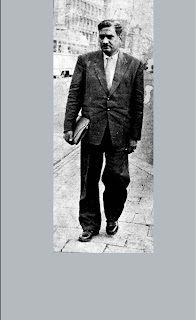 In this book
Avula Gopalakrishna Murthy (AGK) a Humanist, an orator, a famous lawyer and a writer gives us a critical appreciation of America and its people.
AGK`s tour is significantly different and praiseworthy when compared to other people was visited that country  and returned home.
AGK saw America from various angles. He tells us the similarities and differences between us and the Americans in various fields of life.
Each chapter in itself is the highlight of  his observations, each one an essay in content with his erudite comments about what he saw and felt.
Hence this book is content oriented where from  the poets find inspiration, the socialists get social matters and the democrats derive thoughtful incentives.
This book is a source of knowledge to the scholars, local administrators as well as the farmers. READ AND ENJOY.
-          Publisher


After watching the beauties of nature while  flying high in the skies we had our first halt at Derham, an oil rich sandy city in Saudi Arabia. The airport was not specially attractive and there was not much activity going around . Next we landed  in Cairo thinking  of the Egyptian rulers, pyramids and the knowledge of their ancient generations. The airport was bigger compared to that of Derham. It looked strictly disciplined place with big built people in lengthy dresses. Arabic architecture was found everywhere.
Our third stop was  at Athens. It is small but the home of ancient civilizations. the mental pictures of great Greek philosophers- Socrates, Plato, Aristotle, Protagoras, Democretus, Thucydides, Thales and historic events like Trojan horse made me emotional in that city. The small buildings with Mangalore tile roofs, painted pots, baskets made of leaves and  reeds and their musical instruments  made me feel that we are closer to the Greeks in our culture. They are our older  brothers in our ancient civilization .
Then we stopped in Rome- famous for their kingly dynasties. There is a similarity between Athens and Rome in the sense, that the Renaissance movement flourished in both those cities. It is the home for art, architecture, paintings which preached by the world renowned artists and personalities like Leonardo da vinci, Michelangelo , and Medici. Rome`s leanings are towards   the west. We dont see here neither the French sophistication nor the Egyptian strength.It is a mixture of many things.
Our last stop was in Paris-the airport is illuminated with delicate fanciful scenes.The people were active and yet it is peaceful. It was spectacular. The people revel in their fashionable and passionate life. They seem to be proud of themselves, their literature and their western culture. From there we took a long jump, crossed the Atlantic ocean and reached New York-the city of cities.


People, Attitudes, Life Style
We may sit in our country and wish well for the world but it does not help us to know the outside world. We remain ignorant.If we tour various countries, meet people, observe their nature and their culture it may not give  us  a chance to know much about them but it surely enables us to know ourselves.
America is a big country though not population-wise. It helps backward countries and also interfere in their matters.Thus it is a powerful nation. Their population was up to  18 crores and 20 lakhs ( in 1963).It is less than  half of our population -ours was 45 crores ( in 1963). In 1812 their population was 72 lakhs and 50 thousand.In 1852 it was 2 crores and 20 lakhs. Meanwhile 20 lakhs Europeans migrated to America. According to Homestead rule of 1862 migrant could buy  160 acres of land paying Rs 20 or 50 per acre. That helped land distribution mightily  and large number of people migrated and settled in America.
People from almost all European countries we find in America. It looks like a small size Europe. Not only Europeans many people from Russia, Arab countries, Africa, Asia, Japan and China went there and formed settlements. America is a merger of various nationals into one country- a mixture of many minorities. The greatness of America is that  internationalism is an inherent part of their nationalism.
The feeling of individual right is dominant here in America. They dont` differentiate  between a master and a servant - that feeling is predominant in  rest of the world.The way they address each one as mister is to be appreciated.
All the settlers consider themselves as Americans and English as their language. Because of this we find unity in diversity in this country.
People here are conscious and instead of expanding their families they expanded their wealth in the past 20 years keeping limiting their population between 18 and 20 crores (1963)  They dont` have to struggle with family planning  projects  like us. They consciously limited the families while enjoying the comforts of life.
A peculiar tendency of  the Americans is noteworthy. When they work  they are meticulously immersed in it undisturbed  When they sit to eat they do full justice to eating. They enjoy the free time with their families visiting different places. They know how to work, how to eat and how to enjoy life. That is their specialty .
Their weekend is like a festival to them.Rarely people abstain from weekend travel and enjoyment.They rush out in their cars. For me that looked like more strain than relaxation. When I pointed  it to some friends they too shared my opinion. We can make them rethink and see the point.
They are fully conscious of their rights as well as their duties.
We see humane brotherly feeling towards blacks and their colored people here. But in the southerners we see  the pride of their color though their number is on the decline. Their special status is  taking a downward trend.
America is a country of distances-place to place, state to state thousands of miles apart. Though all speak English there is variation in style between the people of north, south and east. They are not different in eating and dressing. There are differences in industrial areas and agricultural areas. Though we see differences in some ways unity is predominantly felt there.
We can quote small examples of how humans behave similarly worldwide. We see people caring for pigeons feeding them and flying them . In India we see humane services people feeding ants with sugar.In this beef eating nations we find all such people-the humane services society.
I had witnessed a painful scene  at Kaufman cafe in Belmont Plaza of New York. In India  dogs, pigs and beggars fight with each other to collect food  half eaten, thrown out of hotels and homes. Such scenes dissolve our independence into a zero, humanness melts into nothingness. A different scene , not that intense, I came across here. Some food was served in small cups. One gentleman just  tasted  a bit and pushed the dish away. A cleaner there removed  top  portion from that cup and reserved it for himself. It really pained me.
The scene in the restaurant was a painful reminder of India. I had not seen many such things in America. Yet I could feel the sadness thinking of them.
I did not see beggars in America. I saw an odd looking man with a  card board plate around his neck asking for alms. That is their way of begging for such people here. There are shelters yet I saw one begging in  in New York.
One drunkard approached me in San Francisco  and asked me to help him to buy a ticket to next city. I moved away saying sorry!  I saw him leaving the place , he might have asked some others for help.

CONCLUSION
I am able to put down here some of my experiences in America during my sixty  days tour. It is not possible to expound everything. Every good thing should  finally  come to an end. Hence I stop here.
We cannot see everything in such a big country in such a short time. I cannot pretend that I have seen everything and I know every thing about this country. A close observation of every thing is not possible in such a hurried trip.
My main purpose is to put down the things true to my observation and understanding. I looked at things keeping democratic values as basis for my opinions.
If the readers understand that I have not  seen much of America they  will not expect more details from me.
I cannot say that  everything  in America is good. Every country  has its shortcomings. But I wanted to present the good side of America that I have seen. That may be some help to us.  It is not my aim either to criticize America or praise it. I don`t get into such politics or controversies.
I wanted to tell my people about the good side I have seen there.
I have seen their democratic  way of functioning . They are my social attitudes too.
If anybody differs from any opinions they can express them giving their reasons rationally. I don`t have any conflict with such persons.
Good things cannot be confined to certain places. They will not have any national barriers. They can be found  anywhere.
I assumed impartial attitude to what I saw and what I wrote.
I tried to coordinate certain ideas that we  and the Americans   particularly have. Some may not like my way. Truth is always bitter. You can find my search for truth and love of freedom in my book. That was my aim in my tour and in my observations.

Posted by innaiah at 7:30 AM No comments: