Agehananda Bharati was Austrain turned in to Indian monk and later under the influence of Humanist philosopher M N Roy turned as Rational thinker. He taught cultural anthropology in Syracuse university, USA.Toured and lectured Far East, Asia, Europe. Contributed several articles and written his autobiography under the title: Ochre Robe.
It was banned in India but later expanded American edition cameout.
At the invitation of me he delivered two talks in Hyderabad and we could trace one. Rekha Saraswat , editor of Radical Humanist magazine put the lecture in utube video.
This is first time to come out in that format. 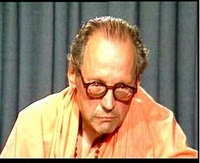 Posted by innaiah at 4:39 AM No comments:

No need of God to create universe!

Out standing scientist Stephen Hawking along with Leonard Mlodinow declared positively that philosophy is dead.
Alarming to philosophy lovers, of course.
During 1940s M.N.Roy, humanist philosopher  warned that unless philosophy takes into consideration the philosophical consequences of modern science, it cannot survive.
That is exactly the reason why Stephen Hawking emphatically said that philosophy is dead.
The Grand Design is the latest book in which the authors proposed M-theory as unified development which Einstein dreamed of.
The philosophy has to answer the questions faced by modern world but fail to do so. What are they?
“Why is there something rather than nothing?
Why do we exist?
Why this particular set of laws and not some others?”

Hitherto people thought that everything was created by god. They did this out of ignorance. For every natural event like thunder, lightning, rain, fire, oceans, earth, planets, stars ancient people imagined gods behind them .Hence they worshiped them to get favors and to escape calamities. So many gods were created and several religions emerged out of peoples ignorance.
For the first time Ionian Greek thinkers put systematic rational thinking which changed the minds of people.
Thales, Miletus, Pythagoras, Anaximander, Empidocles,  Democritus  and few others are in the list. Their thought influenced generations but again religions camouflaged their causation.
Ptolemy ( 85-165 AD) through his 13 volume treatise convinced the world that earth is the center of the universe and also earth is flat. Christians accepted that theory.It continued until Galileo ,and Copernucus, Kepler radically changed our concepts and thinking. Sun is the center of the universe and earth goes round the sun. The rational thinkers suffered in the hands of fanatic Christian authorities. They regretted much later and accepted their mistakes.
As scientific thinking, innovation, discoveries progress , different theories emerged and some of them look diametrically opposed to each other.
Now it is established that four forces are certain namely:
Electro magnetic, Gravitation, weak nuclear force, and strong nuclear force.
Einstein came out with theory of relativity which radicalized the world concepts. At micro and macro levels there are particle, light, wave theories and also different concepts of universe. There are several dimensions. New Quantum theory again totally changed the thinking process.
Big Bang theory ( originally named by Fred Hoyle), Expanding theory, steady state theory and others also came out.
If so may realities and conflicts are there, which one is true and which one is not?
Are there many universes and if so each universe must be having its own laws too.
These are mind boggling theories.
Stephen Hawking came out with his M-theory where in synthesis and reconcialation  is possible. Positive energy of matter can be balanced by negative gravitational energy according to Stephen. The universe creates itself due to gravity. This spontaneous creation is the sufficient reason for the existence of universe, says Stephen and Leonard.
Thus M-theory is not only miracle, mystery but real too.
THERE IS NO NEED TO INVOKE GOD FOR SUCH DESIGN. Wonderful , excellent conclusion of Stephen Hawking.
What about intelligent design, then? It is only cunning way of introducing blind faith of religion in round about way.
Is this end of all?
No. There is no end in Science. Scientific method  is ever growing and continuous process. All theories are tentative. If some thing better and provable theory emerges, people  support it. One great virtue in scientific method is: Self correction .It is not there in holy books, religions and blind faiths. This self correction only leads humans ever progressive and forward looking.

Email ThisBlogThis!Share to TwitterShare to Facebook
Posted by innaiah at 4:23 AM No comments: